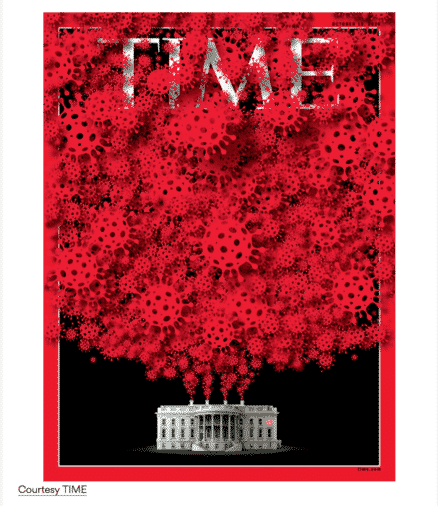 Politico “You’d be forgiven if you’re having a hard time following the state of play on a coronavirus relief package. Even Mitch McConnell, the Senate majority leader, appears to be reeling from the whiplash. “The discussion from day to day can be confusing for all of us to follow,” the Kentucky Republican said. Truer words never spoken!
Trump has spent the last few days vacillating between two completely different, irreconcilable poles: not wanting a Covid relief bill, because it includes a “bailout” of blue states, and wanting a “big deal,” which will definitely include a bailout of blue states. Square that circle. Or, better yet, don’t.
AND NOW (as of 12:25 EST) … Trump desperately wants a Covid relief deal, and his White House seems to be trying to make it happen for him. But McConnell said today in Kentucky he thinks it is very unlikely something will get done in the next three weeks — and that explains the tension here. WHO KNOWS WHY TRUMP WANTS THIS. He may want noise to fill the silence. Maybe he wants a bump in the stock market. We’re not mood readers or psychiatrists or psychics. This deal could’ve been cut 90 times between May and now.

How To Interpret All This?

Axios “The FBI says it has busted up a domestic terrorism plot that targeted Michigan Gov. Gretchen Whitmer.
Six men were charged by the Justice Department for planning to kidnap Whitmer and put her on trial. Another seven face state charges ranging from threats of terrorism to material support for terrorist acts.The “Wolverine Watchmen,” as the militia was known, held a meeting where informants recorded discussions of attacking the state capitol and police in Lansing, the indictments allege.
The arrests come as federal and local law enforcement are particularly attuned to the possibility of politically motivated violence in the final month before the election. … Before they could attack, law enforcement moved in, arresting some as they pooled money for more explosives, officials said.  … The FBI is investigating potential domestic terrorists around the country and trying to determine whether any of those people are planning acts of violence before or after the election.”
Trump has attacked Whitmer for months, and he tweeted “LIBERATE MICHIGAN!” in April: “In an afternoon news conference, Whitmer defended the restrictions she imposed … while taking direct aim at Trump. Just last week, she noted, the president had, during a debate, ‘refused to condemn white supremacists and hate groups like these two Michigan militia groups.’
_________________________________________________________

U.S. Virus Response Turned A Crisis Into A Tragedy 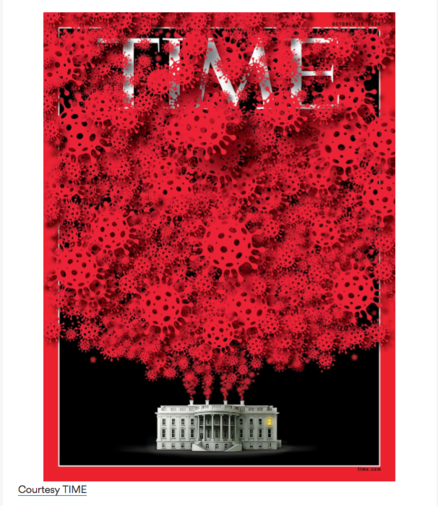 Axios “For the first time in its 208-year history, The New England Journal of Medicine — the world’s most prestigious medical journal — has taken a political stand, the N.Y. Times reports.

Dying In A Leadership Vacuum

Portions of the editorial:
‘With no good options to combat a novel pathogen, countries were forced to make hard choices about how to respond. Here in the United States, our leaders have failed that test. They have taken a crisis and turned it into a tragedy.’
… The United States came into this crisis with enormous advantages. Along with tremendous manufacturing capacity, we have a biomedical research system that is the envy of the world. We have enormous expertise in public health, health policy, and basic biology and have consistently been able to turn that expertise into new therapies and preventive measures. And much of that national expertise resides in government institutions. Yet our leaders have largely chosen to ignore and even denigrate experts. …
…The response of our nation’s leaders has been consistently inadequate.The federal government has largely abandoned disease control to the states. Governors have varied in their responses, not so much by party as by competence. But whatever their competence, governors do not have the tools that Washington controls. Instead of using those tools, the federal government has undermined them. The Centers for Disease Control and Prevention, which was the world’s leading disease response organization, has been eviscerated and has suffered dramatic testing and policy failures. The National Institutes of Health have played a key role in vaccine development but have been excluded from much crucial government decision making. And the Food and Drug Administration has been shamefully politicized, appearing to respond to pressure from the administration rather than scientific evidence. Our current leaders have undercut trust in science and in government, causing damage that will certainly outlast them. Instead of relying on expertise, the administration has turned to uninformed “opinion leaders” and charlatans who obscure the truth and facilitate the promulgation of outright lies.
… Anyone else who recklessly squandered lives and money in this way would be suffering legal consequences. Our leaders have largely claimed immunity for their actions. But this election gives us the power to render judgment. Reasonable people will certainly disagree about the many political positions taken by candidates. But truth is neither liberal nor conservative. When it comes to the response to the largest public health crisis of our time, our current political leaders have demonstrated that they are dangerously incompetent. We should not abet them and enable the deaths of thousands more Americans by allowing them to keep their jobs. 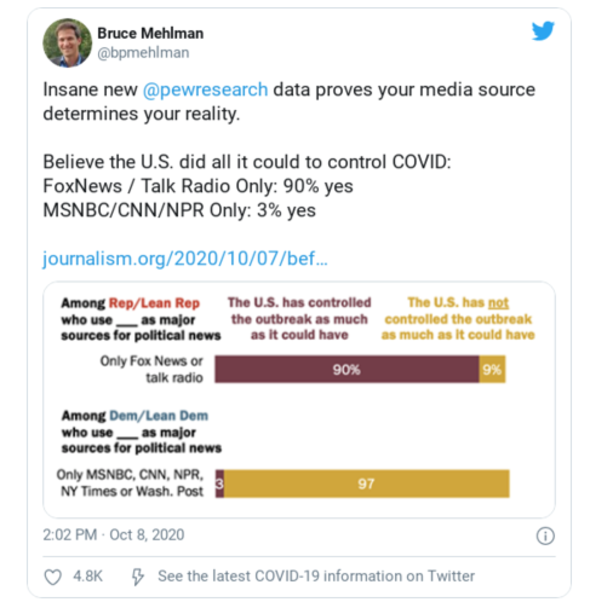 WaPo “Trailing in the polls, stricken with the novel coronavirus and stuck in isolation at the White House, President Trump has tried to project an image of strength and normalcy that belies his troubled circumstances. … But the president’s attempts to depict a back-to-normal presidency were punctured when the Commission on Presidential Debates announced Thursday morning that next week’s scheduled town hall meeting with Trump and Democratic presidential nominee Joe Biden would take place virtually rather than in person.
After the Commission’s announcement, Trump told Fox Business … “I am not going to do a virtual debate.”
Hours later, Trump campaign manager Bill Stepien said they would be willing to push the October 15 debate back a week and then move the third debate to October 29, just days before the November 3 election. But Biden’s campaign rejected their proposal, with campaign spokeswoman Kate Bedingfield saying in response, “Donald Trump doesn’t make the debate schedule; the Debate Commission does.”
_________________________________________________________ 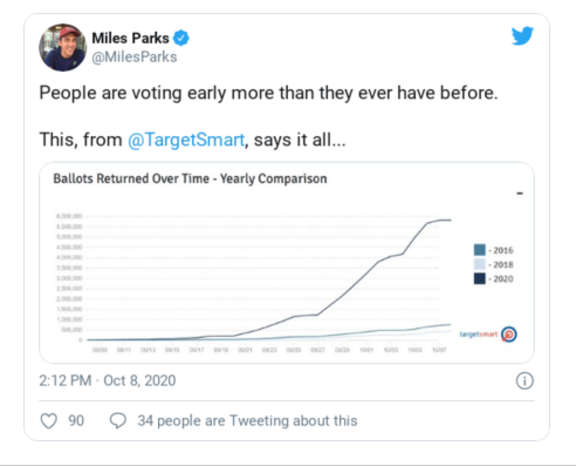 NYT “The inflammatory behavior that has alienated voters beyond his base has long posed the most significant impediment to Mr. Trump’s re-election. But one week after he rampaged through the first presidential debate and then was hospitalized with the coronavirus, only to keep minimizing the disease as it spread through his White House, the president’s conduct is not only undermining his own campaign but threatening his entire party.
New polls show Mr. Trump’s support is collapsing nationally, as he alienates women, seniors and suburbanites. He is trailing not just in must-win battlegrounds but according to private G.O.P. surveys, he is repelling independents to the point where Mr. Biden has drawn closer in solidly red states, including Montana, Kansas and Missouri, people briefed on the data said.
“There are limits to what people can take with the irresponsibility, the untruthfulness, just the whole persona,” said Jeff Flake, the former Republican senator from Arizona. Mr. Flake is crossing party lines to support Mr. Biden, who made his first visit of the general election here Thursday.
Many of the Sun Belt states seemingly within Mr. Biden’s reach resisted the most stringent public-health policies to battle the coronavirus. As a result, states like Arizona, Georgia and Texas faced a powerful wave of infections for much of the summer, setting back efforts to revive commercial activity.
Some of the states that appear effectively tied today, such as North Carolina and Georgia, could still prove difficult for Mr. Biden to carry. Few Democratic nominees have proven able to forge coalitions to tip these states and the president’s appeal among working-class whites in the South will at least keep him competitive.
Even in South Carolina, Republicans have grown deeply concerned about Senator Lindsey Graham’s re-election campaign. On Thursday, in a conference call with a group of lobbyists, Mr. McConnell vented that the party’s Senate candidates are being financially overwhelmed because of small-dollar contributions to ActBlue, the online liberal fund-raising hub.
In some ways, the shifts in the Sun Belt have accelerated since Mr. Trump’s nomination four years ago. Even as he stunned Hillary Clinton in three crucial Great Lakes states, he lost Colorado, Nevada and New Mexico and fared worse in Arizona, Texas and Georgia than Mitt Romney had four years earlier.”
_________________________________________________________

Keep An Eye On Alaska

Politico “In their quest for the Senate majority, Democrats are pushing the battleground map as far north as it will go. New money from outside groups and small dollar donors are flooding into Alaska, where independent Al Gross, who is backed by state and national Democrats, is aiming to unseat first-term GOP Sen. Dan Sullivan. The race has been on the edges of the Senate map for months, potentially competitive but receiving far less attention than some more expensive and geographically closer contests.

“But now a new influx of outside spending and grassroots dollars into Gross’ campaign have given Democrats a major financial edge in the state in the final four weeks. A new super PAC formed Monday is dropping $4 million into the race, the largest outside investment so far and a signal of optimism among party leaders. And Gross announced that his campaign raised $9 million over the past three months, a staggering sum that would have been enough to fund an entire campaign.”

Politico “Democrats have a clear shot at taking back the Senate majority next month. But if they fall short, Cal Cunningham may shoulder the blame. … Suddenly, Cunningham has clouded over what should be a fairly obvious Democratic path to victory that runs straight through North Carolina.The Democratic nominee’s infidelity and reluctance to address it fully is now a cudgel for endangered Republican Sen. Thom Tillis. Tillis’ fortunes were dimming just a week ago, as Cunningham reported eye-popping fundraising numbers on top of a monthslong lead in public and private polling.
Democrats can win the majority without North Carolina, but the path is more complicated. And Democrats insist Tillis has yet to make up ground in the polls.”
North Carolina is one of a handful of top-tier states that will determine the majority. Republicans currently hold a 53-47 advantage, but Democrats are favored to win in Arizona and Colorado. Republicans have an edge in Alabama, and races in Iowa and Maine are highly competitive. Democrats have also pushed races in deeper red territory like Alaska, Montana, South Carolina and Kansas into play, broadening their path back to power.
But Josh Holmes, a close confidant to Majority Leader Mitch McConnell, said “without question the clearest pathway” for Democrats to win the Senate was through North Carolina. “And it looks like Cal Cunningham sexted it away.” … Democrats scoff at the possibility voters will punish Cunningham after Trump has been repeatedly accused of sexual misconduct, including the president’s own words in the “Access Hollywood” tape, which was released a month before the 2016 election.”
_________________________________________________________

Nearly 58 million people watched Wednesday’s debate between Vice President Pence and Sen. Kamala Harris, making it the second most-watched VP debate in TV history.  The record: Joe Biden vs. Sarah Palin in 2008.
Takeaway (Axios): It was more polite than Trump vs. Biden. But we didn’t learn a lot more. 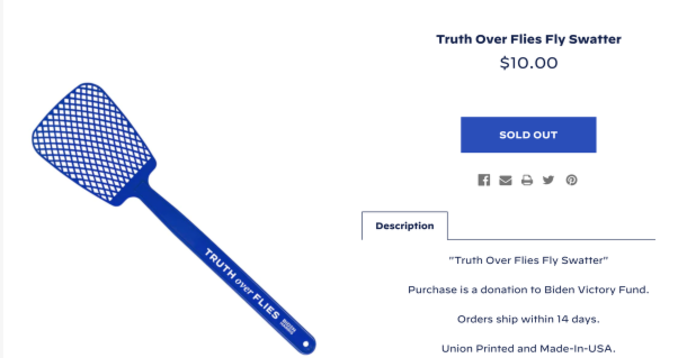 Politico “The Nobel Peace Prize went to the WORLD FOOD PROGRAMME “for its efforts to combat hunger, for its contribution to bettering conditions for peace in conflict-affected areas and for acting as a driving force in efforts to prevent the use of hunger as a weapon of war and conflict.” Last year, it “provided assistance to close to 100 million people in 88 countries.” 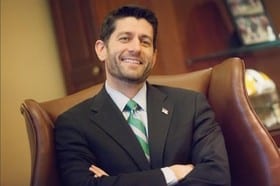 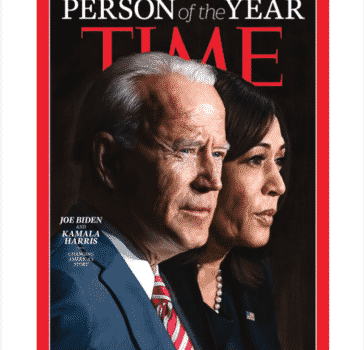 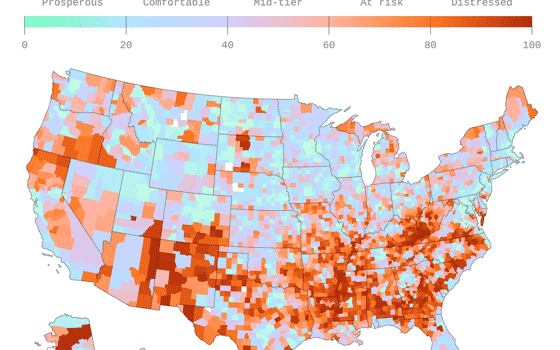