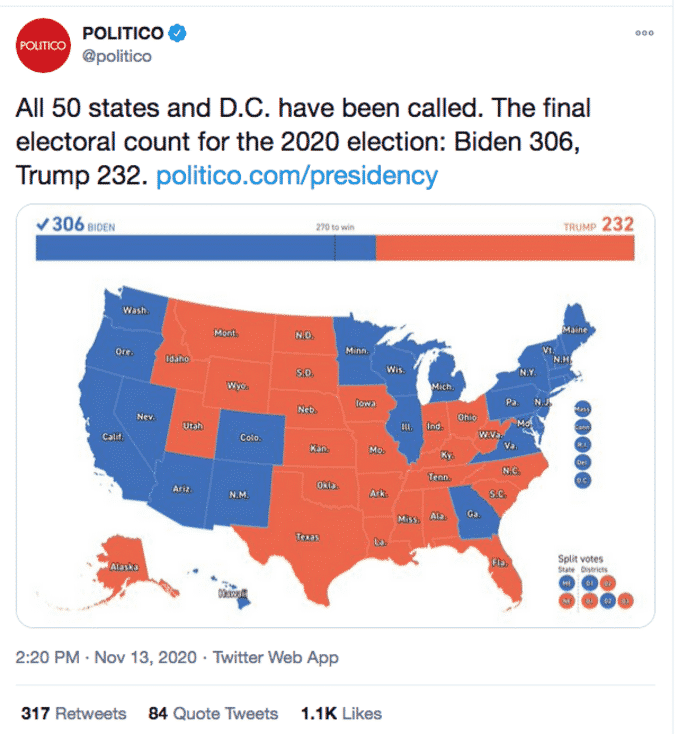 “The November 3rd election was the most secure in American history. Right now, across the country, election officials are reviewing and double checking the entire election process prior to finalizing the result. “When states have close elections, many will recount ballots. All of the states with close results in the 2020 presidential race have paper records of each vote, allowing the ability to go back and count each ballot if necessary. This is an added benefit for security and resilience. This process allows for the identification and correction of any mistakes or errors. There is no evidence that any voting system deleted or lost votes, changed votes, or was in any way compromised.”
… “While we know there are many unfounded claims and opportunities for misinformation about the process of our elections, we can assure you we have the utmost confidence in the security and integrity of our elections, and you should too…”
– Cybersecurity & Infrastructure Security Agency, (CISA) Part of the Department of Homeland Security
About CISA … CISA safeguard’s the Nation’s Cyber and critical Infrastructure
___________________________________________________ 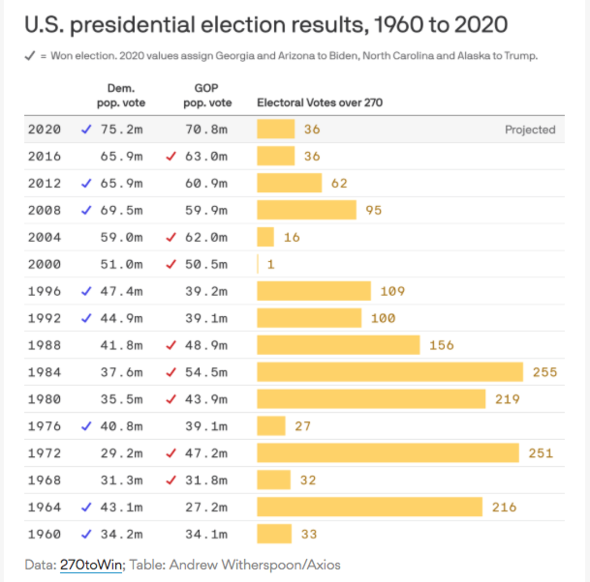 Update On Where Things Stand

theSkimm “[Tump] is still refusing to concede. And is doubling down on his claims that voter fraud is behind Biden’s win. To be clear: US election officials and a team of international election observers have said there’s no evidence of voter fraud.
What’s Biden saying about all of this? Well, he thinks Trump’s refusal to concede is “an embarrassment.” And his transition team is considering legal action against the General Services Administration (the federal agency that helps oversee the transfer of power) because it has yet to officially recognize him as the winner. It’s blocking him from getting $6.3 million in funds for his transition or from receiving any presidential briefings that the president-elect would usually get. But it’s not affecting his transition plans that much. Yesterday, Biden named his longtime aide Ron Klain as his chief of staff and he hopes to announce more members of his Cabinet before Thanksgiving.”

Despite the tight count in key states, Joe Biden matched the election results Trumpworld labeled a “mandate” in 2016 (see chart above).  The president-elect received 75.7 million votes as of yesterday, with counting still underway in vote-rich California. That’s roughly six million more than the record 69.5 million votes Barack Obama received in 2008, and marks the second consecutive time a Democrat has beaten Trump in the popular vote.

“The shocking lack of specifics, which Trump’s critics mock as laughably unserious for something so consequential, is not a deficiency. It is the feature of his strategy. Trump is not making a narrow, surgical, legally feasible case to enhance his chances to still be living in the White House come January 21. (That’s … improbable.) He’s not doing this, either, to win the argument. (It’s mathematically impossible.) He’s doing it, say political strategists, longtime Trump watchers and experts on authoritarian tactics, to sow doubt, save face and strengthen even in defeat his lifeblood of a bond with his political base.
And it’s … working. Seven in 10 Republicans, according to a POLITICO/Morning Consult poll earlier this week, believe the election was stolen from their candidate.
… Trump, after all, started preparing for what he was going to do if he lost this election before the last election. And he simply could not be doing what he’s doing at this stage if he hadn’t been doing it for this long. “He’s able to do this now,” said Ruth Ben-Ghiat, a historian of authoritarians, fascism and propaganda, “because of all that he’s already set up.”

… It goes way back. “Donald is a believer in the big-lie theory,” one of Trump’s lawyers told Marie Brenner for a story in Vanity Fair 30 years ago this fall. “If you say something again and again, people will believe you.”

Trump is an expert liar. The foundation of his existence is lies. He’s not self-made. He’s not a good businessman, manager or boss. He’s an insider instead of an outsider. He’s not been somehow singularly a victim but rather spectacularly privileged and lucky. “He is not who he says he is,” former Trump casino executive Jack O’Donnell told me this past August. “He is,” Trump biographer Michael D’Antontio said, “a walking lie.”
… The stakes are sky-high, and the collateral damage to America’s democracy could be lasting and profound, but Trump is doing what Trump has always done. He’s spinning a myth to serve his own interest. He’s doing what he believes he needs to do to put at least himself in the best possible position for the future after yet another failure. “This isn’t about winning the presidency,” former Trump publicist Alan Marcus told me this week. “It’s his exit strategy.”
To Read Politico Magazine Article: CLICK HERE.
___________________________________________________ 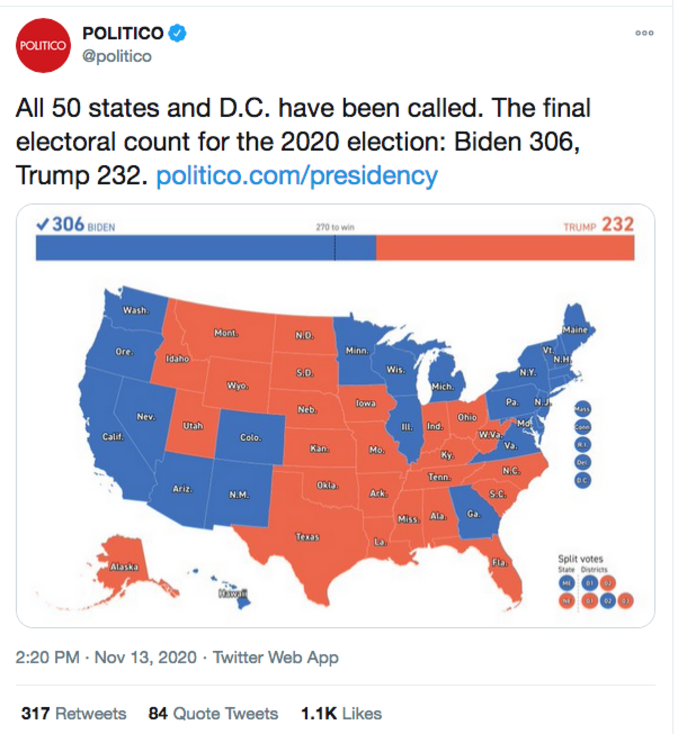 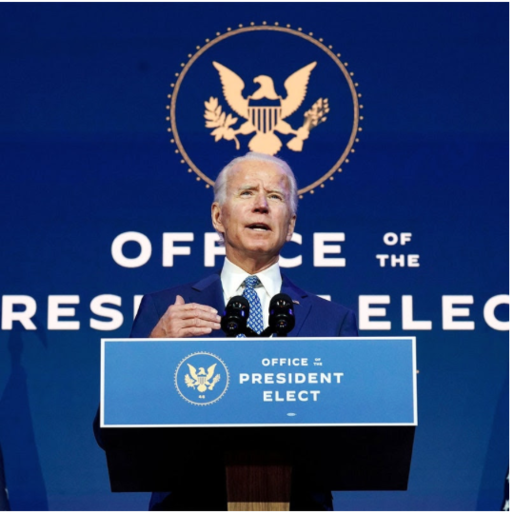 … “This election result won’t be overturned. Recounts occasionally change margins in the hundreds, never in the tens of thousands.”- Karl Rove, in the WSJ, “
… “false vote-fraud claims “appear to be motivated in part because the president doesn’t like to lose, and never admits loss. … “I’m more troubled by the fact that other Republican officials, who clearly know better, are going along with this, are humoring him in this fashion. It is one more step in delegitimizing not just the incoming Biden administration, but democracy generally. And that’s a dangerous path.”- President Obama, told Scott Pelley of “60 Minutes” 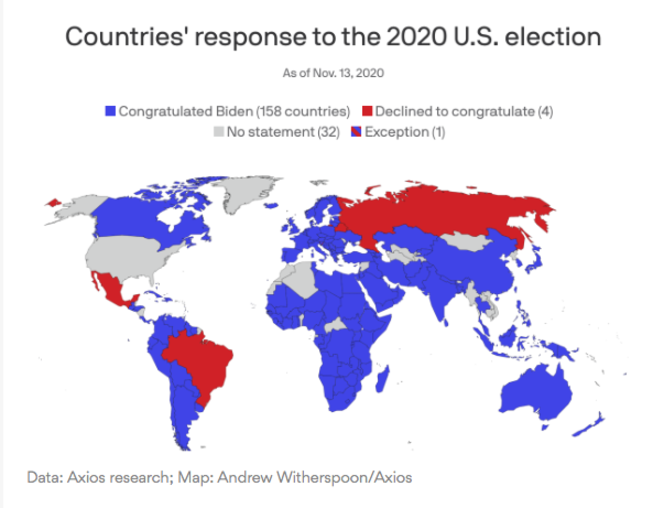 #3 A Time To Remember The Long Game

Preparing For A Biden Presidency

Politico “With Saturday’s election of President-elect Joe Biden, K Street is staring down its second presidential changing of the guard in four years. In his victory speech Saturday night, the incoming commander in chief laid out an expansive agenda and hit the ground running Monday by immediately forming his own coronavirus task force. Lobbyists are preparing for more than just the reversal of key Trump-era policies …
Key TakeAways: 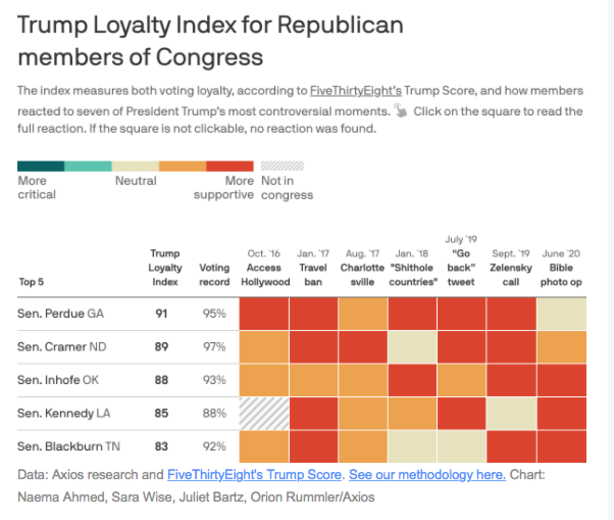 Georgia On My Mind

theSkimm “Georgia is going to be recounting presidential votes in the state…by hand (to be completed by Nov 20th).  Right now, Biden’s leading in the state by over 14,000 votes. Officials have said it’s unlikely to change the results ( Biden’s lead). NO MATTER WHAT HAPPENS Biden already has enough electoral votes to secure the presidency. But still, the recount puts even more attention on Georgia, where two Senate races are facing a runoff election (think of it as a rematch, since no candidate reached the criteria needed to win) in January. Democratic challengers Raphael Warnock and Jon Ossoff are trying to unseat Republican incumbent Sens. Kelly Loeffler and David Perdue respectively. And remember: whoever wins in Georgia could help solidify control of the Senate. Axios “Sen. David Perdue, whose upcoming Georgia runoff will help determine which party controls the Senate, has been President Trump’s top loyalist in the upper chamber,

BGOV “House Democrats, reckoning with a disappointing election showing this year, are still expected to hold their majority while losing a handful of seats to Republican challengers. The AP hasn’t yet called every House race, but projections at this time show Democrats are most likely to keep control. At least six incumbent Democrats have lost re-election bids, despite earlier projections that they could gain up to 15 seats. In the 2018 mid-term elections Democrats took the chamber after they netted 41 seats; the largest single-year pick-up since the post-Watergate midterms of 1974. But some of those new Democrats were among the party’s losers Tuesday.
In the coming weeks, Capstone will be looking at what to expect in both the House & Senate, here is a brief overview …

What’s Got People On High Alert

COVID-19 “Cases around the world are spiking again, including in the US. Earlier this week, the US surpassed 10 million cases – just ten days after hitting 9 million. Now, one health expert is warning that the US is on track to topping 200,000 new cases a day, after 150,000 reported in a single day, yesterday. And we’re learning that hospitalizations are breaking records too. One analysis found that nearly 62,000 patients in the US were hospitalized with the virus – an all-time high and a 40% rise from two weeks ago. The West and Midwest are being hit particularly hard, but the virus’s surge is widespread. Texas [and California) have more than 1 million coronavirus cases. Meanwhile, California and New York are issuing new restrictions to combat the virus (think: things like stopping or limiting indoor dining and capping get-togethers at 10 people).
“… Health officials warned that a fall coronavirus surge was likely as temperatures started to dive and people traded in their long walks for socializing indoors. Now, that surge appears to be in full swing. And officials are warning it may get worse in the next few months.

…This week, the CDC updated its guidelines on how to celebrate Thanksgiving so you can protect yourself and your family. Its recommendation: celebrate with the people in your home. If you’re going to a gathering, make it an outdoor one. And bring your own food, utensils, and drinks. It’s also important to set expectations about testing and limit exposure or quarantine in advance of a get-together. And as always, don’t forget the basics: mask up (it’s protecting you and others), wash your hands, and social distance. Winter is coming. And the US could be in for a dark one. While the holidays may be a time to celebrate with family and friends, remember that making sacrifices now to limit the spread can save lives and get us all back to ‘normal’ sooner.

The Trickiest Vaccine In U.S. History

Axios “The best coronavirus news so far … Pfizer [this week] took a huge step toward a COVID-19 vaccine, reporting that its candidate was effective in over 90% of uninfected clinical trial patients. Reality check: It’s a giant and welcome development, but the pandemic will be with us long after vaccine distribution begins. 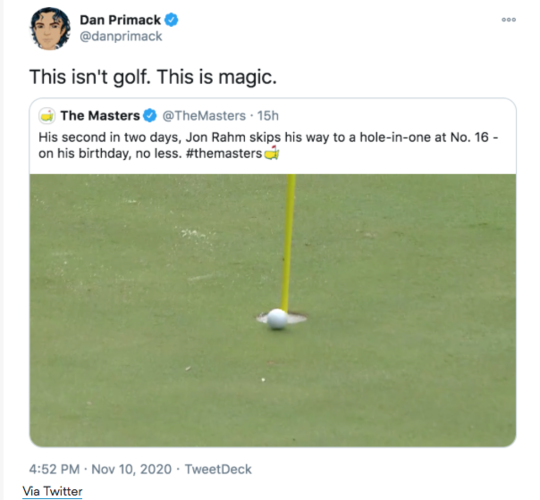 Treat Yourself To The Greatest Golf Shot Ever 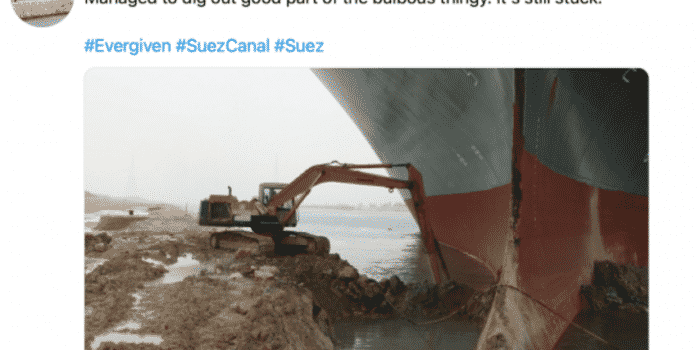