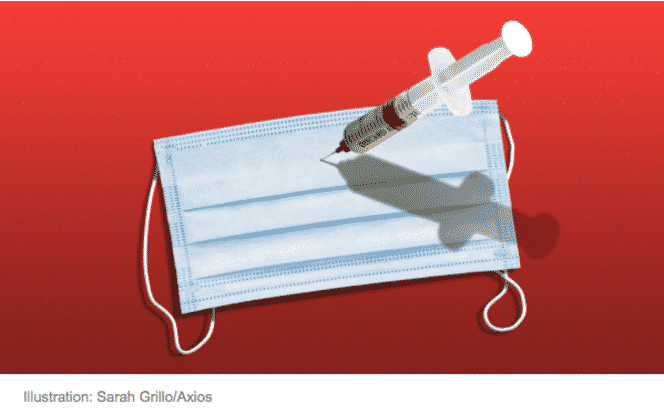 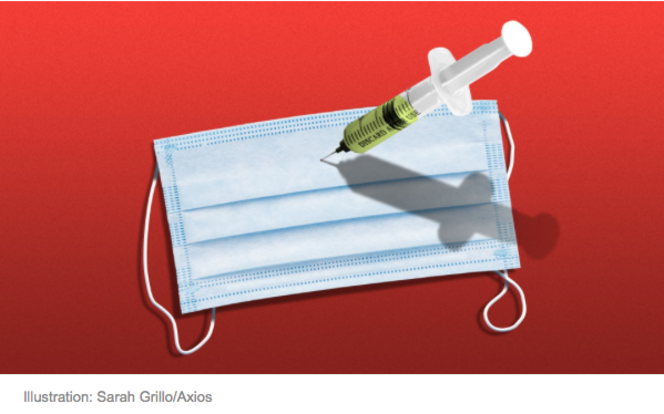 Politico “Thursday was historic: America broke the back of the pandemic. New cases are at an eight-month low. Deaths are at a 10-month low. Best of all, if you’re vaccinated, you can take off your damn mask.”
Axios “The big picture: The CDC granted its seal of approval today for the fully vaccinated to participate in indoor and outdoor activities without wearing a mask or physically distancing,

“If you are fully vaccinated, you are protected, and you can start doing the things that you stopped doing because of the pandemic,” said CDC Director Rochelle Walensky.

The CDC can now say with confidence:

The guidance has a few caveats, including for those in health care settings, correctional facilities and homeless shelters or traveling on planes or public transit. Masks should still be worn to abide by federal, state, local, tribal or territorial guidance, including local businesses and workplaces. The bottom line: Vaccines are beating back the virus, and more vaccinated people will mean a smoother return to normal life.

Can’t Quit You Quite Yet

Rochelle Walensky, director of the CDC, said on Friday that mask-wearing will “be hard to let go” of for some and argued Americans should be allowed to part with their masks in their “own due time” despite her agency’s newly loosened guidance for face coverings.

Punchbowl “House Republicans didn’t even need a recorded vote. The GOP Conference booted Rep. Liz Cheney (Wyo.) from their leadership by voice vote. This is the most drastic move thus far to oust a prominent critic of former president Donald Trump from the top of their party. Removing Cheney took roughly 15 minutes.
“Why it matters: (Axios) The stunning removal of the No. 3 House Republican over her condemnation of Trump’s election lies reflects the influence the former president still retains over the GOP. The big picture: The vote marks the most significant turning point in an internal party feud that is unlikely to subside any time soon. What we’re hearing: Cheney now plans to lean even harder into her criticism of the former president and those she thinks are continuing to enable him — including McCarthy. She will fully embrace her role as chief Republican Trump critic and fighter for an alternative vision of the GOP’s future.

“We cannot let the former president drag us backward and make us complicit in his efforts to unravel our democracy. Down that path lies our destruction, and potentially the destruction of our country. … If you want leaders who will enable and spread his destructive lies, I’m not your person, you have plenty of others to choose from. That will be their legacy.”
– Rep. Liz Cheney’s remarks at conference meeting

TODAY “House Republicans chose Rep. Elise Stefanik (R-N.Y.) to fill the leadership post recently occupied by Rep. Liz Cheney (R-Wyo.). The Friday morning vote cap[s] a tumultuous week for the party, which has established support for Trump’s false claims about the 2020 presidential election as a defining issue, and those who challenge his falsehoods have found themselves exiled.”

Poltico “We’ve frequently used the term “civil war” to describe what’s going on in the Republican Party. But what if that’s the wrong way to think about it? What we’re seeing in the GOP isn’t a civil war; it’s a purge. That’s the case Jeff Greenfield recently made in POLITICO Magazine,

Politico “Four months after a siege on the Capitol, a sizable faction of the House GOP is downplaying Jan. 6’s violent attack by a pro-Trump mob, with one Republican comparing it to a “normal tourist visit.” Infuriated Democrats say remarks like that — plus this week’s public ousting of the most vocal Trump critic in the GOP — is further proof of the extremism overtaking the Republican Party, leaving little chance of healing the political and psychological wounds caused by the deadly assault on Congress.

Politico “House Democrats have unveiled a potential deal for a bipartisan commission into the Jan. 6 insurrection at the Capitol. Modeled after the 9/11 Commission, and forged in an agreement between House Homeland Security Committee Chair Bennie Thompson (D-Miss.) and ranking member John Katko (R-N.Y.), the proposal includes key concessions to Republicans but has not yet received the formal support of House Minority Leader Kevin McCarthy. Speaker Nancy Pelosi announced that the proposal could receive a floor vote “as soon as next week.”  Deets:
Worth noting: Katko was one of the first House Republicans to come out in favor of impeaching Donald Trump after the insurrection. He’s also an ally of McCarthy, who hasn’t signed off on this.”
__________________________________________________________

Politico “… the CW remains that the White House will get some of its infrastructure spending and some of its “Families Plan” stuff but not all of it. And certainly not all the tax hikes the administrations wants to offset the cost. The only thing people seem to agree on is that the corporate rate will rise. But perhaps nothing else will. And the West Wing (especially the occupant of Oval Office) is still holding out hope for a bipartisan deal … “Senate Republicans plan to present … Biden with a new, more detailed infrastructure offer in the coming days as they try and negotiate a landmark compromise with the White House. Punchbowl? Here’s a question that’s worth asking: Is President Joe Biden willing to do a $800 billion “hard infrastructure” bill with no tax increases — just increased “user fees,” “repurposed” Covid relief funds and collecting unpaid taxes —  if Senate Republicans pledge to deliver 40 or so votes to help pass it? Would the White House take the deal even if progressives objected? And how would Senate Majority Leader Chuck Schumer (D-N.Y.) and Senate Democrats react?  White House officials aren’t saying what their response would be just yet, but we could find out soon. Biden met with Sen. Shelly Moore Capito (R-W.Va.) and a group of senior Republicans in the Oval Office on Thursday, and in public and private, both sides say it went well.”
__________________________________________________________

NYT “There is no simple answer to the question “What set off the current violence in Israel?” Isabel Kershner, The New York Times’s Jerusalem correspondent, explained the series of recent events that reignited violence in the region. …
As Isabel explained, a longstanding legal battle over attempts to forcibly evict six Palestinian families from their homes in East Jerusalem heightened tensions in the weeks leading up to the outbreak of violence. The always tenuous peace was further tested by the overlap of the Muslim holy month of Ramadan with a month of politically charged days in Israel.
A series of provocative events followed: Israeli forces barred people from gathering to celebrate Ramadan outside Damascus Gate, an Old City entrance that is usually a festive meeting place for young people after the breaking of the daily fast during the holy month. Then young Palestinians filmed themselves slapping an ultra-Orthodox Jew on a light rail, videos that went viral on TikTok.
And on Jerusalem Day, an annual event marking the capture of East Jerusalem during the Arab-Israeli war of 1967, groups of young Israelis marched through the Old City’s Muslim Quarter to reach the Western Wall, chanting, “Death to Arabs,” along the way.
Stability in the city collapsed after a police raid on the Aqsa Mosque complex, … where at least 21 police officers and more than 330 Palestinians were wounded in the fighting.
These clashes spiraled into an exchange of airstrikes that has brought Israeli forces to the edge of Gaza — and the brink of war.
Politico “The Gaza violence increasingly spilled over into turmoil elsewhere. Across the West Bank, Palestinians held their most widespread protests since 2017. … Within Israel, communal violence erupted for a fourth night.”
Vox “[Over a hundred] have already died in the fighting between Israel and Hamas, and more will perish if the fighting continues to escalate. But there is little chance that the root cause of all this death — the long-running political status quo in the Israeli-Palestinian conflict — will be altered in the slightest. Israeli-Palestinian warfare has become routinized; it follows a familiar script that repeats itself endlessly. “It’s like the worst version of Groundhog Day,” says Khaled Elgindy, the director of the program on Palestine and Palestinian-Israeli affairs at the Middle East Institute. Leaders “just put a Band-Aid on it and we go back to the pre-crisis normal.”