Ta-Da … Earmarks Are Back

Punchbowl “Rep. Rosa DeLauro (D-Conn.) and Sen. Patrick Leahy (D-Vt.), the new chairs of the House and Senate Appropriations panels, will announce in the coming weeks that Democrats will reinstate earmarks — also known as “member-directed spending” — in next fiscal year’s spending bills.
Democrats say they will be transparent and disclose the details of each earmark — who requested it, and which entity would get the money. Members cannot request earmarks for entities to which they have financial ties. And Congress will not allow earmarks for for-profit institutions, such as private companies. Earmarks will be limited to state and local governments and nonprofits that carry out quasi-government functions. There will be limits on how much of each spending bill can be allocated toward earmarks.
Some lawmakers, including House Majority Leader Steny Hoyer (D-Md.), have been arguing for years that Congress should bring back earmarks. The idea is to give members of Congress a personal stake in spending bills. Hoyer and other pro-earmark lawmakers also argue that no one knows the needs of a state or congressional district better than the people who represent them in Congress.”
STAY TUNED FOR MORE INFO!
____________________________________________________

Punchbowl “House Democrats … are on track to pass President Joe Biden’s $1.9 trillion Covid-relief package late next week or next weekend. But make no mistake about it: There are lots of obstacles Democrats still need to overcome to get there. The biggest challenge continues to be raising the minimum wage to $15 per hour using the arcane budget reconciliation process.
Passing a Covid relief package is a huge issue for Biden — and the country. It’s the new president’s biggest priority, and he’s spent a lot of political capital on it. With the House out of session this week, Budget Committee Chair John Yarmuth (D-Ky.) and his staff are pouring through the more than 500-page bill, the product of work by nine different House panels. Senate Democratic staffers are also vetting the package with the Parliamentarian’s office in that chamber, a critical procedural step needed to determine if the legislation complies with the reconciliation process. Hello Byrd Rule.

When it comes to the minimum wage, the critical question always has been whether it would survive the Byrd Rule in the Senate. The Byrd Rule is a complicated series of tests that control what can be included in a legislative package under reconciliation. Democrats are using reconciliation because it requires a simple majority to get a bill through the Senate, avoiding a GOP filibuster. Republicans did it in 2017 to pass their big tax-cut package.

WaPo “Texas’s top Republicans are under heavy criticism for their response to the damaging deep freeze plaguing the Lone Star state, which has left at least 47 people dead, hundreds of thousands without electricity and millions without clean water.  AND … There’s now a water crisis, “as pipes cracked, wells froze and water treatment plants were knocked offline.”
President Biden … said he would sign a major disaster declaration for Texas as early as today. 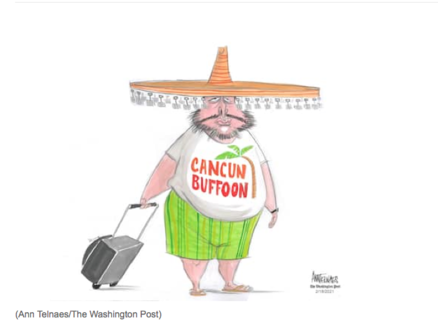 What On Earth Was Ted Cruz Thinking? Politico “In the middle of an unprecedented natural disaster in his state, the Texas Republican Senator jetted off to Cancun with his family. (Rule #1 of public life: Always show your face during a crisis.)

POLITICAL SCANDAL IS NOT DEAD There is something refreshingly normal about the Ted Cruz scandal. The drama of Cruz returning from sunny Mexico — chastened and apologetic for fleeing Texas while 3 million of his constituents remained without power — was a kind of throwback to an era when politicians could be embarrassed.

The Trump years were dominated by one figure defined by his inability to be shamed and supporters defined by their unwillingness to be outraged by his behavior. A lot of observers wondered if the age of political scandal was dead — if partisans on both sides were so defined by hatred of their rival political tribe that they would let their own leaders get away with just about anything. And then a bearded man appearing to be Cruz was photographed with a roller bag at the United counter … ready to board a plane to Cancun. Cruz. After an overnight silence, Cruz seemed to blame the trip on his two daughters, 10 and 12, who he said in a statement just wanted a respite from the cold. He hinted, without outright saying, that his plan was only to drop them off in Cancun and return right away.

BGov “Federal civil rights protections would be expanded to cover sexual orientation and gender identity under H.R. 5. called the “Equality Act. ” The bill was introduced on Feb. 18 with 223 Democratic cosponsors. The measure was referred to the House Administration, Education and Labor, Financial Services, Judiciary, and Oversight and Reform committees.

Sen. Jeff Merkley (D-Ore.) announced he would introduce a similar measure in the Senate. The House passed H.R. 5 in the 116th Congress by a 236-173 vote on May 17, 2019, with eight Republicans voting for the measure. The Republican-controlled Senate didn’t consider that bill.

By expanding those protections, the measure would allow civil actions to be brought for alleged cases of discrimination against LGBTQ individuals. The measure also stipulates that the Religious Freedom Restoration Act couldn’t be used to challenge a Civil Rights Act (Public Law 88-352) protection.

Welcome to “The Week of Self-Inflicted Wounds.”

“Biden reaches out to Europe, but Trump damage has been done.” Politico “President Biden had a big foreign policy morning, first participating in a G-7 meeting and then delivering remarks to the Munich Security Conference. In his first public address to world leaders, he sought to distance his administration from the former president — speaking sternly on Russia and China and re-upping his commitment to working with global powers.
“Let me erase any lingering doubt: The United States will work closely with our European partners. He also indicated his renewed support to NATO allies, saying that he is halting the withdrawal of U.S. troops from Germany and lifting a cap on the number of U.S. forces based in Germany.
“European leaders in particular worry that Trumpism remains alive, are skeptical about the results the White House can squeeze from a deeply divided U.S. Congress and aren’t yet sold on meeting the Biden administration’s expectations on China, Russia and trade.”
____________________________________________________

Axios “The U.S. supply of coronavirus vaccines is expected to significantly expand over the next few months, with more than enough doses available to vaccinate all U.S. adults before the end of July … from a Bloomberg analysis.
Why it matters: If manufacturing goes according to plan, the intense competition for shots will end relatively soon, and attention will turn instead to increasing vaccine uptake. The U.S. is currently administering 1.6 million doses a day. Enough vaccine should eventually become available to boost that figure to 4.5 million.”
RAYS OF HOPE — “A Quite Possibly Wonderful Summer,” The Atlantic: “Even academics who have spent the pandemic delivering ominous warnings have shifted their tone to cautiously optimistic now that vaccination rates are exploding. … “If all of this holds true, it would mean that many aspects of pre-pandemic life return even before summer is upon us. Because case numbers guide local policies, much of the country could soon have reason to lift many or even most restrictions on distancing, gathering, and masking. Pre-pandemic norms could return to schools, churches, and restaurants. Sports, theater, and cultural events could resume. People could travel and dance indoors and hug grandparents, their own or others’. In most of the U.S., the summer could feel … ‘normal.’”
AND … “New data: Pfizer’s coronavirus vaccine may be more effective after just one shot than researchers had previously realized.”
____________________________________________________ 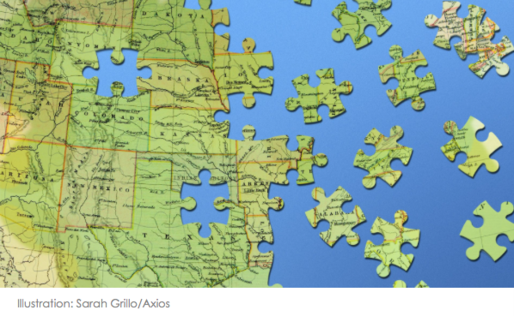 Politico “Pennsylvania Republican Sen. Pat Toomey isn’t running for reelection in 2022. But his vote to convict former President Donald Trump is already rocking the race to succeed him. County parties have censured Toomey, prompting backlash from centrists and even some Trump supporters who think the efforts will hurt the GOP in upcoming elections. Former Rep. Ryan Costello, a moderate Republican eyeing a bid for the Senate, has publicly come to Toomey’s defense in the wake of his vote. Ex-Trump aides, in turn, are making plans to torpedo Costello before he announces a campaign.
MEANWHILE ”Malcolm Kenyatta, a state representative and progressive activist from Philadelphia, officially launched a campaign for U.S. Senate on Thursday, casting himself as a champion of working people who would make history as Pennsylvania’s first Black and first openly gay senator. …
____________________________________________________

In The Badger State

SENATE Journal Sentinel “Milwaukee Bucks executive Alex Lasry, who helped lure the 2020 Democratic National Convention to Milwaukee, entered the race for U.S. Senate Wednesday with a vow to bring “a fresh perspective and a new way of thinking” to the nation’s capital. Lasry, 33, is a New York native and son of Marc Lasry, a hedge fund billionaire and one of the owners of the Milwaukee Bucks.
…In a four-minute video announcing his candidacy, Lasry received the backing of several top Milwaukee Democrats. … Even though the seat isn’t up until 2022, the race has already started and will likely be among the more high-profile contests in the nation. Lasry is the second candidate in the Democratic field, joining Outagamie County Executive Tom Nelson. Others who are considering candidacies include state treasurer Sarah Godlewski, Lt. Gov. Mandela Barnes and Steven Olikara, founder and CEO of Millennial Action Project. State Sen. Chris Larson of Milwaukee and former Congressional candidate Randy Bryce are also weighing their options.
AND FOR GOVERNOR … Reince Priebus has been calling key GOP officials and operatives in Wisconsin the past week and signaling he’s seriously exploring a bid for governor of his home state in 2022. Priebus’ biggest selling point presumably would be the support of the former President — the two patched things up after Priebus was fired by the president back in 2017. Former Wisconsin GOP Lt. Gov. Rebecca Kleefisch is widely expected to run and is seen as a potential Republican front-runner, but Priebus would be formidable in a primary with Trump’s support. Incumbent Democratic Gov. TONY EVERS is likely to seek a second term.”
____________________________________________________ 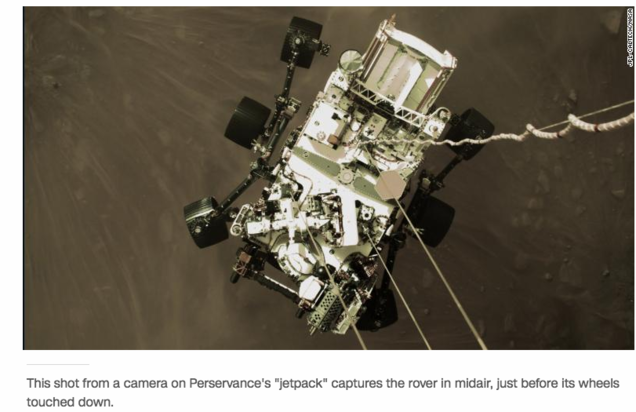 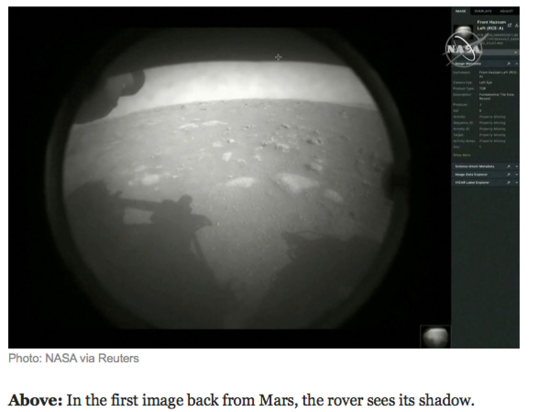 “The team is overwhelmed with excitement and joy to have successfully landed another rover on the surface of Mars,” said Adam Steltzner, the rover’s chief engineer. “When we do such investments, we do them for humanity, and we do them as a gesture of our humanity.”
After safely landing on the surface of Mars Thursday, NASA’s Perseverance rover has sent back a never-before-seen view: what it looks like to land on Mars. The rover also returned some beautiful postcards of its landing site. The first image shared during a NASA press conference Friday was “exhilarating” for the team when they received it. It shows the rover nearing the Martian surface during entry, descent and landing. A camera on the descent stage of the spacecraft captured the perspective, something that wasn’t possible on previous missions. Unlike with past rovers, the majority of Perseverance’s cameras capture images in color.