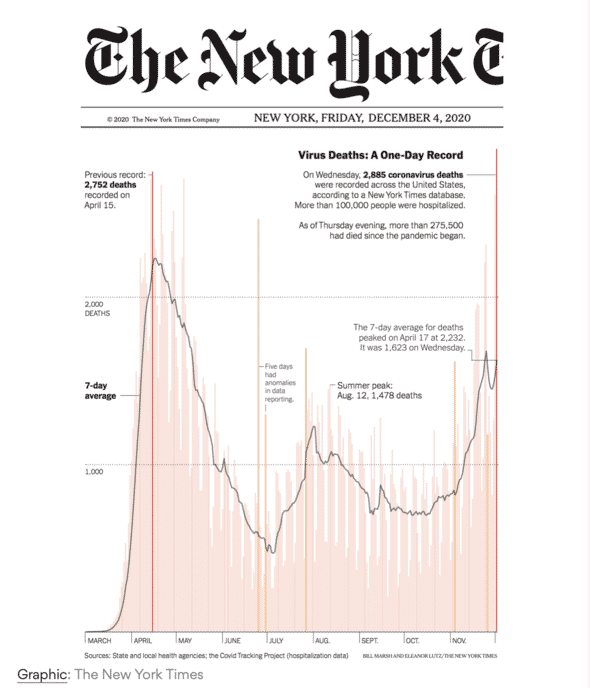 Many Balls In The Air Right Now

–.One Week — 7 DAYS — before the government funding deadline. The end of the conggressional session is around the corner. Speaker Nancy Pelosi joined in Senate Majority Leader Mitch McConnell’s optimism this morning when she said that “there is momentum” for a coronavirus relief bill, and that it would ride alongside a government funding bill that comes due next week.
There are many balls in the air right now, so stick with us here for a moment.
— GOVERNMENT FUNDING: There is essentially a binary choice here: a stopgap, short-term funding bill, or a long-term, full government omnibus. All sides prefer an omnibus. Pelosi was optimistic about it this morning, but the negotiators tell us they believe there is somewhere around a 30% chance of getting an omnibus done. We’ll see who is right.

WITHOUT AN OMNIBUS, there are two options: a long stopgap, or a short stopgap. A long one would bring you to March, which is actually the smarter play here because then it would force another deadline for Covid relief talks. A short one would be a few weeks, in order to get the omnibus locked up. That would be a fine outcome, but would leave no deadline by which to do another round of Covid relief. Not deadly, but not ideal.

All Eyes On Mitch

BGov “All eyes are on Senate Majority Leader Mitch McConnell (R-Ky.) as a $908 billion bipartisan stimulus proposal gets support from Democratic leaders and increasing interest from Republicans. House Speaker Nancy Pelosi (D-Calif.) and Senate Minority Leader Chuck Schumer (D-N.Y.) earlier this week threw their support behind it, seeing it as a starting basis for stimulus negotiations. McConnell has yet to publicly endorse the plan, and called for a narrow package while on the Senate Floor yesterday morning.
THE DEETS: REPUBLICANS believe a Covid relief bill should include an extension of the Paycheck Protection Program, money for vaccines, liability overhaul and unemployment measures. Democrats want state and local money. The two sides don’t actually agree on liability overhaul. DEMOCRATS ARE SKEPTICAL … Senate Minority Leader CHUCK SCHUMER said this on the floor Thursday: “The Republican leader came to the floor this morning to say compromise is within reach — his words — before reiterating a long list of Republican demands and blaming the Democrats for everything.”
_________________________________________________ 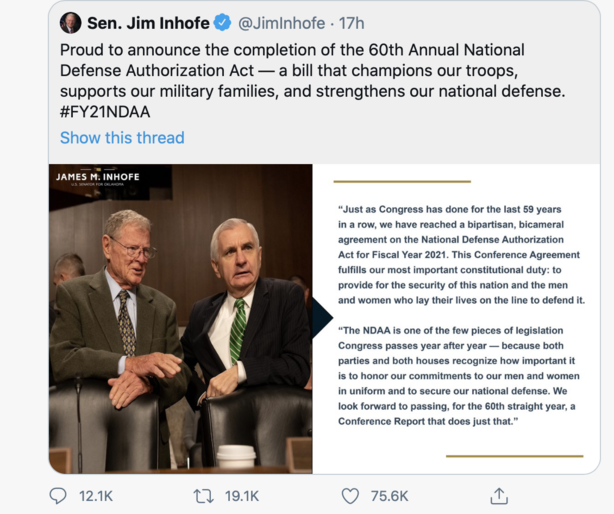 THE PRESIDENT continues to say he will veto the National Defense Authorization Act because it does not change the law that governs social media and other tech companies. — YOU SHOULD KNOW that TRUMP is dug in here, if that’s not obvious.
Defense News “The House and Senate versions (which were reconciled Wednesday after months of negotiations) initially passed by veto-proof majorities, and HASC Chair Rep. Adam Smith predicted that Republicans would vote to override in the event of a veto.
_________________________________________________

Committee Chairs Approved By The Democrats for the 117th Congress

within reach — his words — before reiterating a long list of Republican demands and blaming the Democrats for everything.”

Politico “America’s employers sharply scaled back their hiring last month as the viral pandemic accelerated across the country, adding 245,000 jobs, the fewest since April and the fifth straight monthly slowdown. At the same time, the unemployment rate fell to a still-high 6.7%, from 6.9% in October as many people stopped looking for work and were no longer counted as unemployed … “Friday’s report of another hiring slowdown provided the latest evidence that the job market and the economy are faltering in the face of a virus that has been shattering daily records for confirmed infections. … People who have been out of work for six months or more — one definition of long-term unemployment — now make up nearly 40% of the jobless, the highest such proportion in nearly seven years.” 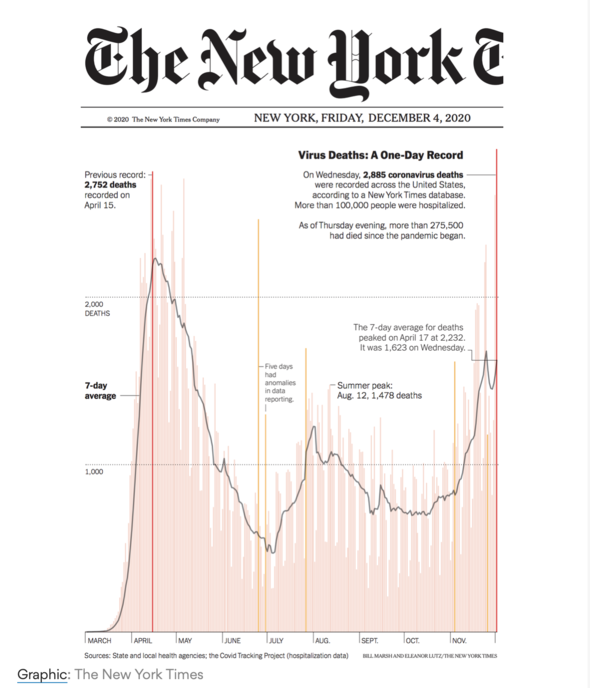 Coronavirus is the #1 cause of death in the U.S. this week, surpassing heart disease. @drsanjaygupta

WaPo “The Centers for Disease Control is recommending “universal mask use” outside people’s homes as part of guidance published Friday aimed at slowing the spread of the coronavirus as the nation braces for what is expected to be the darkest period of the pandemic. This is the first time the agency has advocated for universal mask use indoors. In its weekly Morbidity and Mortality report, the CDC warned that the United States has entered “a phase of high-level transmission” as colder weather and the ongoing holiday season push Americans inside, and said that “consistent and correct” use of face masks is crucial to taming the virus.

Poltiico “Biden asked Anthony Fauci to stay on in his administration to help combat the coronavirus pandemic, the president-elect said today.”  … Two approaches, One Pandemic — Trump is virtually silent on the pandemic, while Biden is preparing to take office during the darkest period of the outbreak.

Biden Plan To Fight The Virus

NBC “For a second-straight day, nearly 3,000 Americans died from the coronavirus on Thursday. Also for a second-straight day, yesterday saw another 200,000 new confirmed cases. Amid that backdrop, President-elect Biden laid out his plans and priorities to combat the pandemic in his first months as president — as a vaccine starts to become available to the public.
More money for businesses and the health care system
More money to distribute the vaccine
More money to reopen schools
Convincing the public to take the vaccine
And asking every American to wear a mask for 100 days: “I’m going to ask the public for 100 days to mask, just 100 days to mask, not forever, 100 days.”

Cook Report “In just 51 days, the United States will close a bizarre chapter of American history. Things will probably never return to “normal,” at least as defined by pre-pandemic standards, but to borrow the title of a great 2013 political documentary about contemporary race and politics in New Orleans, Getting Back to Abnormal maybe should be our goal.

Contrary to the dire predictions of many, the election went off without a hitch, despite circumstances being anything but typical.  … turnout was sky high, counting and reporting went off fine, and there were no signs of significant foreign interference, nor major violence after the results were known. Other than the behavior of a petulant loser, the election went quite well.

For the one year of the 2016 campaign and four turbulent years as president, Donald Trump has challenged the norms of his party, government at all levels, and the entire political process. We are now almost at the end of an incredibly challenging stress test. It seems we’ve passed—if just barely. As Peter Baker and Kathleen Gray wrote on the front page of The New York Times this weekend, “in the end, the system stood firm against the most intense assault from an aggrieved president in the nation’s history because of a Republican city clerk in Michigan, a Republican secretary of state in Georgia, a Republican county supervisor in Arizona, and Republican-appointed judges in Pennsylvania and elsewhere.”

DOUBLE OR NOTHING IN GEORGIA
Two big unknowns remain, relating to the two Jan. 5 special elections in Georgia that will determine control of the Senate. Given the razor-thin margin in the 2018 gubernatorial race, the quarter-point victory by Joe Biden in the state, and the fact that neither side won 50 percent in combined party vote in either race last month, a strong case can be made that it is the most evenly divided state in the country. If Republicans hold both seats or even one, they will remain in the majority. But if both seats go Democratic, the Senate goes to 50-50 with incoming Vice President Kamala Harris able to break ties. The lack of ticket splitting, coupled with our current extreme partisanship, makes it very likely that this is a double-or-nothing event, with one party taking both seats.

What could possibly move the electorate? First, if Congress manages to pass a coronavirus stimulus spending bill during the lame duck, it could have an impact, as Perdue and Loeffler head home to tout their roles in the accomplishment.
Second, Trump’s postelection behavior may have an effect on Georgia voters. He’s no longer the guy his supporters believed was a born-and-bred winner, and his post-Nov. 3 behavior might marginalize him some. But there have been hundreds of incidents over the last five years that could arguably have diminished his standing with the party base. None have so far.”
_________________________________________________ 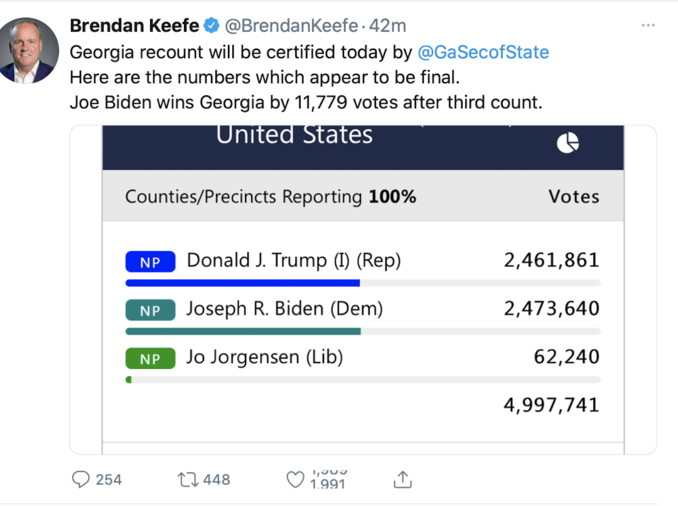 Women’s Museum On The March (Sort of)

Politico “Women got one step closer to getting their own Smithsonian museum today: The Senate Rules Committee passed the Smithsonian American Women’s History Museum Act. The bill passed the House in February. It needs full Senate approval and a presidential signature before becoming law. The museum has been a longtime goal of a group of Republican and Democratic women lawmakers, including Sen. Susan Collins (R-Maine) and Rep. Carolyn Maloney (D-N.Y.). Even if the bill made it into law this year, there would likely be another long wait ahead before the museum would be built. It took more than a decade after a bill was passed for the National Museum of African American History and Culture to finish construction. Smithsonian spokesperson Linda St. Thomas said last year that the idea for a women’s museum was great, but that Congress needed first to set aside millions of dollars of funding.”