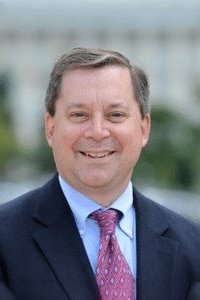 Will Stone brings to Capstone a unique understanding of the political process. As a longtime lobbyist and political activist, he is an expert on the inner workings of Congress. He has served as chief of staff to a senior member of the House of Representatives. Before he joined Capstone, he was a lobbyist at both Jefferson Consulting and Denny Miller Associates where he represented a diverse client base before the House, Senate and administration. He has worked on an array of issues including defense, appropriations, health care, information technology, energy, telecommunications, agriculture, environmental, combating child exploitation, campaign finance reform and others.

Previously, Will served as chief of staff to Rep. Dave Obey of Wisconsin, and acted as his chief policy adviser. He also spent four years as director of financial services for the Democratic Congressional Campaign Committee; a post that kept him engaged in House political campaigns across the country. Prior to that, Will worked as a senior consultant at Campbell, Falk & Selby, a public policy and political consulting firm. He also was a regional political director of the American Medical Association, and oversaw the polling program for AMA’s nonpartisan political action committee. He started his career on the Hill in the office of Rep. Wyche Fowler of Georgia, working as a staff assistant on constituent issues. Will has been active in national Democratic politics, and has served on the backstage and podium staff for numerous Democratic national conventions, and has as been involved in every convention since 1984.

Currently, he serves on the boards of the Wisconsin Institute for Public Policy and Service at the University of Wisconsin and the National Association to Protect Children, and is proud to be a minority owner of the Green Bay Packers.

Will is active in his community — including scouting, sports and other activities — and currently resides in the District of Columbia with his wife Anne; he has two children in college.