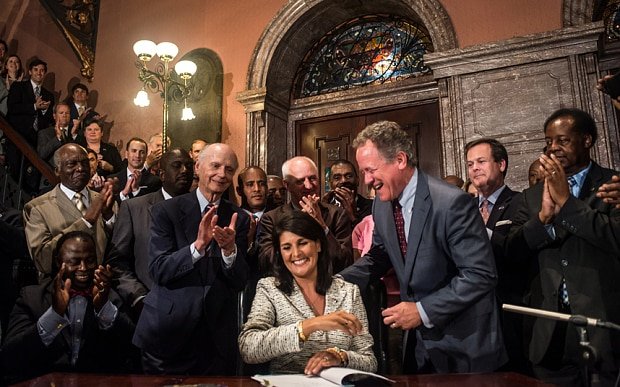 I took a little time off last week to go “up North” and spend some time playing golf, fishing, tooling around in the boat, and generally unwinding. Funny thing though: something dramatic always happens when we go on vacation. In Wisconsin, the state Legislature passed the budget in the middle of the night and in South Carolina, Nikki Haley signed the bill to take down the confederate flag (finally!). In the photo of the bill signing, standing just off to her right is former governor of South Carolina and U. S. Secretary of Education, Richard Riley, a man I am so proud to say was my boss.

What struck me most about these two events is the vast difference between Wisconsin Governor Scott Walker and Secretary Riley – and I don’t mean solely from which party they hail but also in their character and manner of leadership. One man is running for the GOP nomination for President and the other has already given so much of his life to public service, which is unfortunate for the country, because we need more Dick Rileys in government and fewer Scott Walkers.

When Dick Riley first became Governor of South Carolina in 1979, the state was ranked 49th out of 50 states in education spending. After his first term, he was so popular they changed state statute so he could run for a second term. By the end of his second term, the state’s per-pupil spending had moved up to 41st out of 50 due largely to passage of the Education Improvement Act. The act created an ongoing revenue stream dedicated to school reform through a penny increase in the sales tax. Riley understood that South Carolina’s future rested in the education of its young people. He launched a statewide campaign to champion the reform and brought together high profile business executives, community leaders, educators and parents to rally for the change in law. His leadership was one of inclusion because he always viewed himself as a civil servant working for the people of South Carolina and the country. He’s also just plain smart and knows how to get things done.

As Secretary of Education, he was proclaimed by TIME magazine as one of the top ten best cabinet secretaries in history. His tenure is credited with expanding access to college, targeting more funding to high poverty schools and school reforms for low performing schools, creating a nationwide after-school program, and lowering the national student loan default rate from a booming 22% to 6.9%. And with every significant education policy that was enacted, it was done by the politics of inclusion. Various stakeholders, mayors, educators, business leaders, and association representatives were brought in to help inform and shape the policies. As Secretary of Education under President Clinton, Riley made way for education to become a part of the national conversation framing politics. If Scott Walker is elected to national office, I fear education will be a national conversation again, only in a very negative way.

From my days working for the Wisconsin State Senate, I recall budgets passing secretly in the middle of the night behind closed doors. Funny how things haven’t changed all that much, as that’s how it passed this time. Education spending won’t be cut by $127 million, the way in which Scott Walker proposed, but instead, held flat the first year and go up $69 million in the second year. That’s the good news, although essentially no public school district will keep up with inflation. The University of Wisconsin System was cut by $250 million and in-state tuition was frozen at the current level for the next two years, which while on the surface seems great for someone who has a kid going to Madison, it’s horrible for attracting quality personnel and retaining the university’s best and brightest. In addition, he changed the governance of the UW by allowing the Board of Regents to determine tenure rather than have it protected by state law. Again, devastating for the university.

Political pundits are widely claiming that Scott Walker engineered the budget to be a platform for his campaign for the Republican nomination – I think they’re right, no pun intended. Scott Walker’s budget is a laundry list of provisions that should make the Republican party very happy: mandatory drug testing for food-stamp recipients, right to work legislation, expansion of the state’s school voucher program – oh, and here’s a nifty item – significant changes to the state’s open records law that nobody seems to claim credit for authoring in spite of 12 Republican senators voting for it. Note: In the wake of public outcry, the records law changes has since been scrapped – but somebody put there – it didn’t get into the budget in the dead of night by accident…

What Scott Walker does well is his folksy, pull-yourself-up-by- the- bootstraps shtick. His appeal is that he’s an everyday guy who works hard for what he wants. His announcement that “ I know how to fight and how to win” leaves me cold though because civil service shouldn’t be about fighting and winning – it should be about working for the people and serving. One can be a strong leader without being combative. Walker’s favorability rating has plummeted in Wisconsin (although he leads in Iowa) but I predict once the country at large pulls back the curtain and sees Scott Walker for who he truly is, they will punt him off center stage. At the very least I would caution people to be careful what you wish for…

Rolling Stone comments that “His slash-and-burn policies have gutted Wisconsin worker’s collective bargaining rights, defunded Planned Parenthood and more..” He has compared peaceful protestors of his anti-union policies to Isis terrorists – really? Is this what the country wants? One can have conservative politics and try to champion that agenda but to do so in such a divisive manner doesn’t serve either party well. Rather, give us a leader who is respected by both sides of the aisle for their leadership, vision and inclusiveness.

When the picture of the confederate flag bill signing was posted on Facebook, my page immediately lit up with comments from former political appointees, like myself and career employees who all lauded Secretary Riley. For career employees to say that he will always be “THE Secretary of Education” means something. For others to marvel at how they were just a low level employee but how Riley always had the time to graciously greet them, call them “Bud” and ask about their day, means something. He was always the last one on the elevator, holding the door for others, and the last one off. He never assumed airs of importance. “I would still walk on hot coals for him,” one person said, which I think sums up the sentiment that we all still feel about the honor and privilege it was to work for, and with, this great man who has done so much for education in this country. When he left public service in January of 2001 and those of us still there lined the 7th floor hallway leading out from his office with tears in our eyes and gratitude in our hearts, we knew that we had been extremely fortunate to be a part of his team. It’s 14 years and two presidents later and we all still love this man. And I would wager if a public opinion poll were held today on Dick Riley’s popularity in South Carolina, it would be through the roof.

That’s the sort of person who should enter public service – one who includes others, inspires devotion, provides compassionate leadership and promotes cooperation and collaboration between both parties to serve the people. Those are the kind of leaders we need to be a “government of the people, by the people and for the people.”  (Lincoln Gettysburg Address)